As of today, I will no longer be taking orders for work. My waiting list has gotten to an unreasonable length, considering that I only have nights and weekends to dedicate to it, and every little job that I take on just means that people in the queue have to wait that much longer. Also, I think I've been scaring potential clients off with the wait time, so it's time to focus just on working through the commissions that have been patiently waiting. Once I've worked through a good chunk of the waiting list, I'll start taking orders again.
In addition, I need to put all tooling-intensive projects on hold, which means belts, guitar straps, and anything that involves hours of tooling. I've managed to give my right elbow an overuse injury and it needs some time to recover, before I make it worse. I really hate to do this, because this means putting the majority of the waiting list on indefinite hold, but this should only be a temporary situation. There's plenty of drawing I can do in the meantime, and I'm still going to finish up anything where they've already paid or I have something to repair. This also gives me some time to fine-tune patterns, evaluate prices, and I'll still be working on jobs that aren't as likely to re-injure my elbow. In the meantime, there are plenty of items available in my Etsy store.
Posted by wombatsucker at 2:15 PM No comments:

This should guarantee that it will never rain again

As a bicycle commuter in Texas, rain poses some particular problems for me. If I were to wear my rain gear for the ride, it's usually so hot that I would be soaked in sweat by the time I got to my destination. Not to mention the fact that my rain gear is so old that the waterproofing has worn off. The simplest solution is to just put on some grubby clothing, get soaked, and change when I get to work/home. However, this means carrying a change of clothing and another pair of shoes, in addition to all the other gear I need for my day. Years ago I made myself a leather bike bag which has worked quite well for when it's dry, but when it's pouring rain it doesn't quite hold everything I need, and it isn't completely waterproof. When I made the large front rack for my bike, it was intended to be paired with a new, waterproof bag that would hold everything I could possibly want, and I've finally finished it: 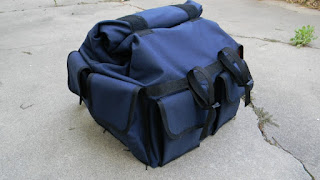 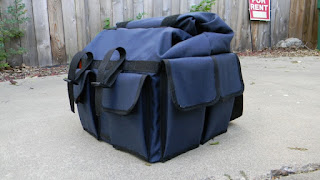 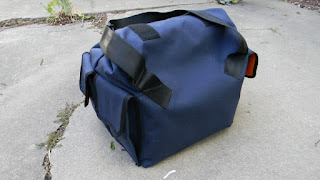 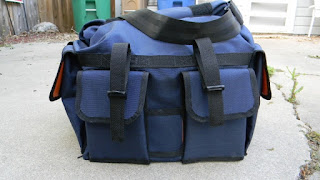 The exterior is constructed out of urethane coated Cordura, in addition to some webbing, twill tape and Velcro. The adjustable shoulder strap is permanently attached, so I can just grab it and go, rather than having to hunt for the strap to attach it. All the pockets and pocket flaps are lined with vinyl coated polyester: 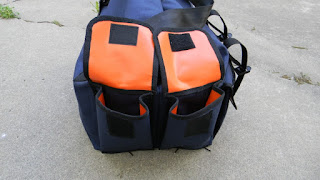 The interior is a floating shell of the vinyl coated polyester, and the main compartment securely fastens with a roll top closure: 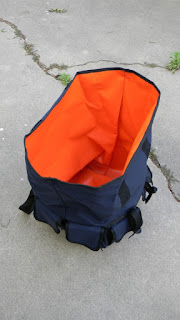 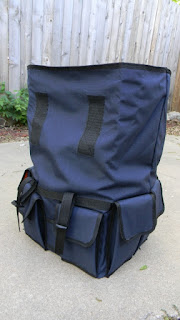 It attaches to the bike at the rear rack loop, at the handlebars, and uses elastic cord to attach to the rack at four points: 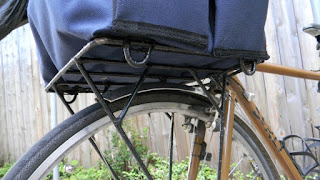 Here is is on the bike, where you can see just how ridiculously huge it is: 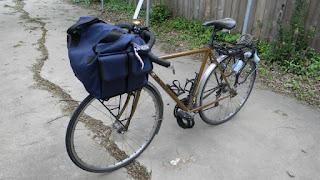 While posting these photos, I noticed the one screw-up that escaped my notice until just now, but I've spent so much time working on this project that I'm just going to let it go. This was sewn on my industrial sewing machine, and when I started I still wasn't all that confident in my usage of it and there were plenty of stitching errors. There was a previous version of this, but it ended up not working out. I had planned it out with the idea of constructing things like I would have if I'd used leather, and that turned out to be a bad idea. This version is the simpler version, and now that it's complete (and now that I've given the machine a speed hack) I feel much more comfortable sewing with the machine. And now I can get back to the leather work.

Posted by wombatsucker at 5:26 PM No comments:

It's been a while since the last blog post, but that's due to the fact that a lot of work has been happening here in my workshop. The only slacking is where this blog is concerned. First up is an archery arm guard. This client is quite the fan of Dr. Who, and she wanted to use two different pieces of artwork from the show. I've never seen this particular show, but from the info she gave me they were the Seal of Rassilon and a Time Lord Seal, and I combined the two to make something unique (and to avoid copyright/trademark issues.) Vegetable tanned leather for the exterior, and deer tanned cowhide for the underside and the straps. The leather buttons are reinforced with plastic on the inside to keep them stiff: 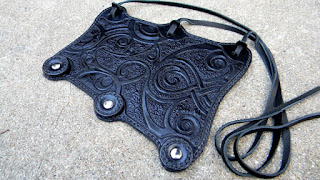 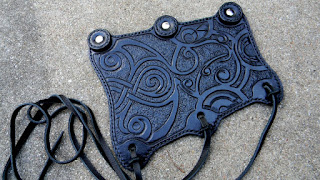 I ordered myself a new knife recently, and that seemed like a perfect opportunity to make another tooth, this time out of elk antler: 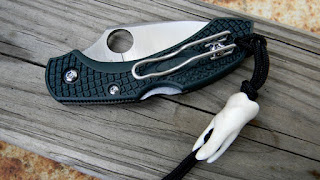 A while back I made myself a belt buckle out of an old sewing machine rotary hook, and eventually I got around to using some scrap deer tanned cowhide to make a scrap belt: 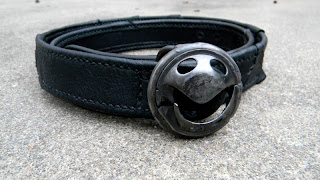 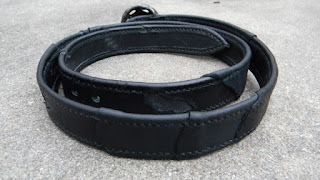 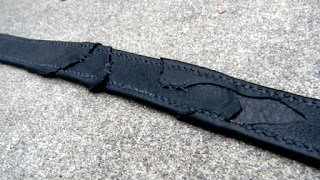 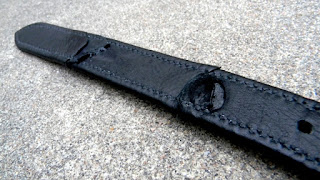 For Valentine's Day I made my girlfriend a case for her Kindle. Again, it's vegetable tanned leather for the exterior and deer tanned cowhide for the interior, and it's been tooled with the imagery of a giraffe dragon, or girafagon, or giragon. And raccoon paws: 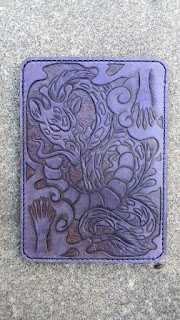 My friend Doug wanted a tool bag for his motorcycle, and he wanted it to fit in a very specific spot - on the front of the frame, between the frame and the front tire. His bike has some decorative accents in the paint job, so he asked if the tooling could be made to match. I came up with some designs that were inspired by the paint job but unique, and here's the result. The bag had to be thin and tall, so as not to get caught on the tire, and I think that off the bike it looks like a little kid's backpack: 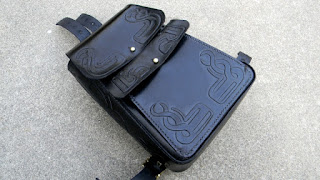 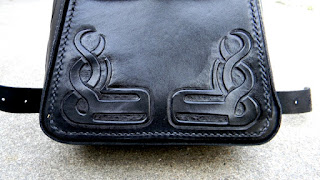 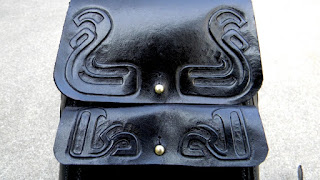 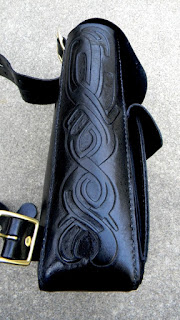 I've been getting more and more requests for repair work, mostly from people that find my Yelp page, and this woman wanted to see if I could fix a camera case. She has a really nice Leica that she inherited, and she found a case at a local shop that would fit it. It was in good shape for the most part, but it had been used and a lot of the stitching had torn, so I restitched what I could: 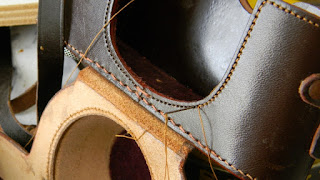 Another Yelp request - this was to make a plaited leather bracelet for a name plate. It had another leather bracelet on it previously, but it was too thin and the owner wanted something beefier. Here is the result: 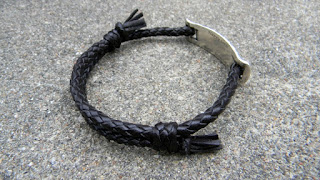 This project was to construct a small case for a trench lighter case. This client has come to me enough times that we've even got a signature color for him - tan over red: 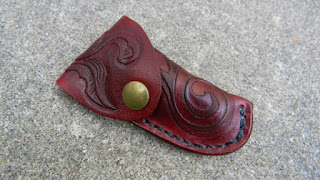 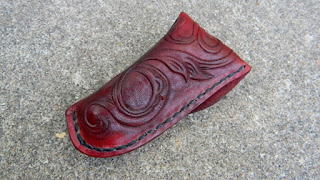 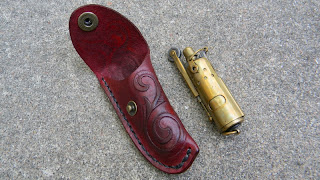 Our weekly craft group, Arts and Drafts, recently celebrated our 6 year anniversary, and once again we had a white elephant gift exchange to mark the occasion. Although, this was the first time that there wasn't rampant gift stealing, which seemed odd. Here is my contribution - a simple zippered pouch: 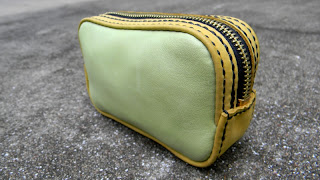 Somewhere in here I found time to work in another request for key fobs from the Hotel St. Cecilia: 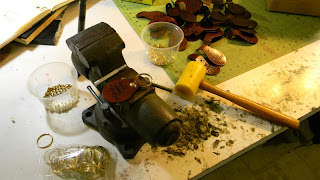 Last but not least, here is a wallet I made for the motorcycle tool bag owner...six years later. It looks like it's been through hell and back, so it's time to make him another one: 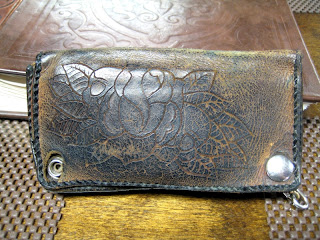 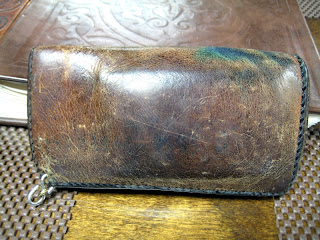 There's one more thing that I've been working on that took a very large chunk of time, but that's going to get its own post.
Posted by wombatsucker at 10:07 AM No comments: