OK, so after a frustrating amount of time spent wrestling with the new Blogger interface, I've finally posted some photos of recent work. First up is a good illustration of my recent obsession with whip making, which was sparked oh so many years ago by Indiana Jones. This is the second leather whip I've made, and is a bullwhip. It's about 54" from the butt of the handle to the end of the braided portion (thong), and if you include the fall, cracker and wrist loop it's right at seven feet. As this definitely counts as a learning exercise, I've been using oily utility leather for all the strands. It's not very strong, especially when you start tapering the strands, and I had to splice a bunch of strands that busted while plaiting, but I'm nowhere near confident enough to attempt this with kangaroo. 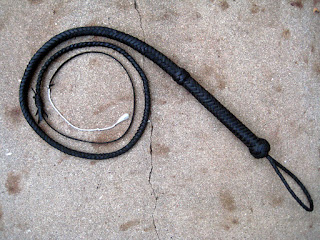 There is a wooden dowel in the handle, which then tapers down to a core, which extends all the way down to the end of the braiding. Here is where I deviated from the normal method of construction - usually this would have another plaited core inside, but the leather isn't strong enough to get a good, tight braid with the thin strands. I had another core laying around from a paracord whip project that never got started, so I used that instead. It's a length of canvas that was tapered, rolled up and glued, and surprisingly it worked perfectly. 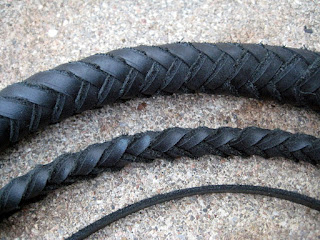 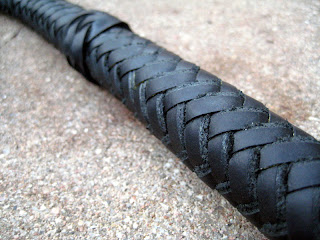 It's much tighter than my first whip, the stockwhip, and it unrolls smoothly and is much more precise. However, the wrist loop at the end of the handle seems to me to be unnecessary. It's not quite long enough to fit around my wrist and still allow for wrist movement, so it ends up slapping me in the wrist whenever I crack it. 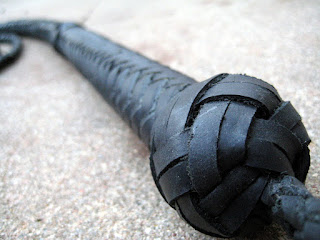 Up next is a tool bag that I made for my dad. He recently had a birthday and, due to the immense amount of tools he owns and uses, I thought he could use a burly leather bag to lug tools around. 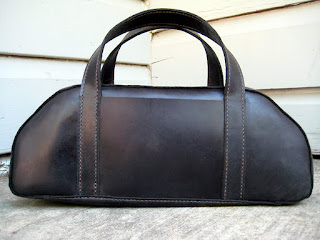 It's the same utility leather as the bullwhip, and the bag has one large compartment and two side pockets. I'm hoping this will look better and better the more beat up it gets. 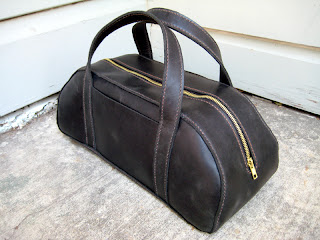 There's a project in the works that required a braided leather wrist loop (more to come on that later), and I ended up cutting the strands way too long. I couldn't let them go to waste, so just for fun I made them into this, which is sort of a quirt: 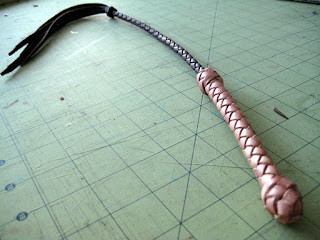 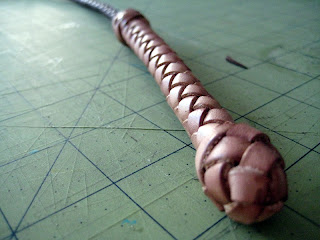 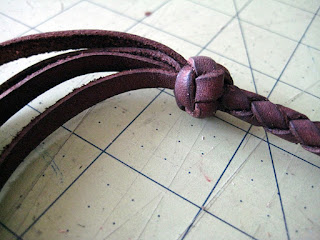 It's a little too floppy to be of any practical use, but it was fun to crank out.

And finally, I recently saw My Neighbor Totoro for the first time, and was inspired to carve a brass acorn for my girlfriend. 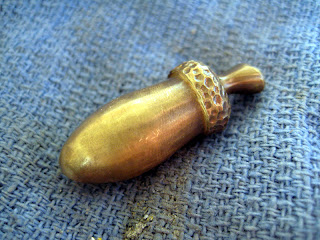 Posted by wombatsucker at 10:04 AM No comments: